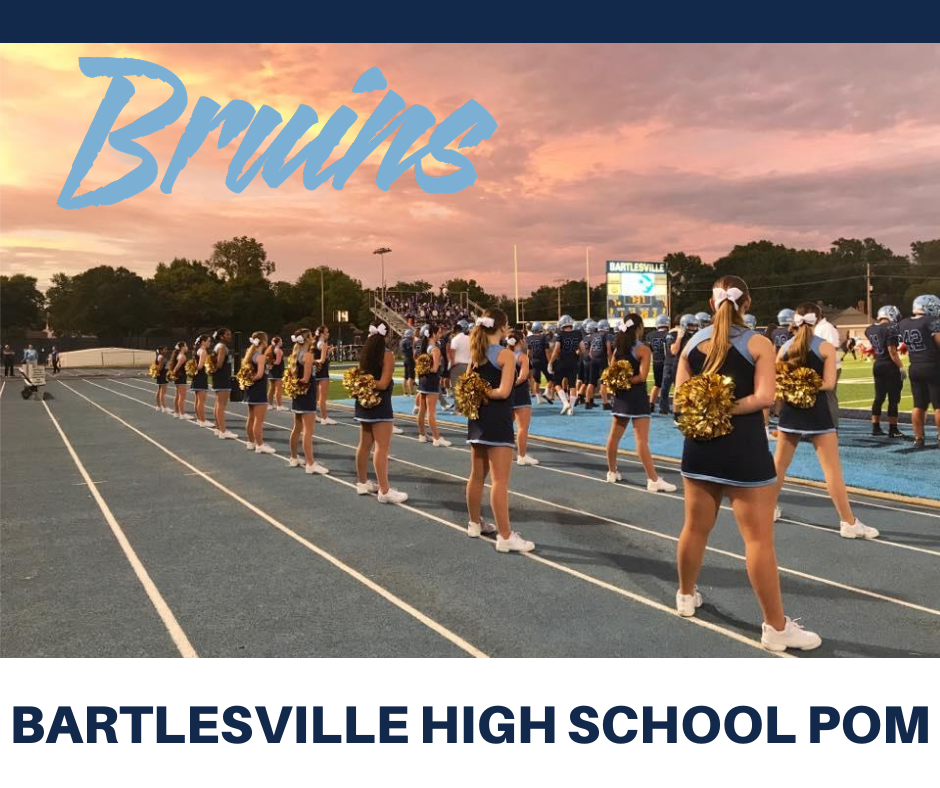 At its July regular meeting, the Bartlesville Board of Education approved hiring Stephanie Stewart, Chelsea Collins, Michella Wilson, and Anna Garrett to lead the pom program for the 2020-2021 season.

Stephanie Stewart, a resident of Bartlesville, returns as one of the Pom coaches for Bartlesville High School. Stephanie coached as the Bartlesville High School Pom Head Coach and director from 2010-2019. She coached as an assistant dance coach at Olathe East High School in Olathe, Kansas in 2008-2009. Her coaching and choreography led her teams to 6 state titles, 19 program state titles, 4 national championships, and numerous choreography awards during that time. She was awarded Dance Coach of the Year in 2016, and several of her alumni have gone on to dance at the collegiate and professional level including OU, OSU, KU, KSU, UCO, and the OKC Thundergirls. In 2019-2020, she coached with the Bartlesville All Star Dance Program and choreographed their Pom routine. In its first year, the program won 3 state titles and ranked Top 4 at NDA nationals. She spends most of her time running around with her three children and her husband, Clent, who works at Phillips 66 and is the Bruin Basketball Head Coach. Stephanie is excited about the opportunity to continue helping dancers reach their goals alongside other passionate and talented coaches. She is passionate about the Bartlesville Pom Program and its tradition of excellence.

Chelsea Collins is another pom coach joining the staff as a High School Mentor and Coach at Bartlesville High School. She is the owner and creative director of PC Dance Company based out of Tulsa, Oklahoma. She is also the owner and choreographer for the Bartlesville All Star Dance Program. The Bartlesville All Star team currently holds the state titles for Senior All State Hip Hop and Jazz, and Jr. All Star Pom. Chelsea has been teaching dance for over 15 years, specializing in technique, contemporary movement, Jazz, and Hip Hop. Her choreography has been sought out by many dance companies throughout the United States. Chelsea has recently been a featured Choreographer out of Los Angeles at the Choreographers Carnival and also at Kidz Carnival. Her students hold national titles and have been awarded prestigious awards and scholarships. She has students and teachers that have been on, “So You Think You Can Dance,” and that are represented with multiple Talent agencies. She is also a national competition Judge for In10sity Dance Challenge, Star Systems, Intrigue, and Hype Dance Competitions. She currently teaches master class events for Talent On Parade and for studios and High Schools all over. Chelsea continues to train and work with dancers and choreographers on a regular basis.

Michella Wilson will also be joining the program as a Pom Coach. Michella started out as a competitive level 10 Gymnast. Michella began her dance training at PC at the age of 17. She has been trained in all genres of dance. She has been an adjudicator and worked backstage at multiple national touring competitions and loves sharing her knowledge and appreciation of dance with dancers across the nation. She has choreographed regionally and nationally, winning competition numbers. Michella has taught dance for 8 years and is also a coach for the Bartlesville All Star Dance Program. She was featured on the hit show “So You Think You Can Dance,” and was an overall talent winner and 4th runner-up in the Miss Oklahoma organization. She is most proud of her non-profit organization known as P.A.T.H. which she founded in 2020. It is an arts program that provides free dance education to inner-city youth across the Tulsa Metropolitan area. She has a passion for teaching young artists to never limit themselves and always take initiative to become the best version of them inside and outside of the studio.

Anna Garrett is joining the coaching staff as the Bartlesville Pom Sponsor. Anna is a BHS alumni and graduated from Oklahoma Wesleyan University in 2017. This will be her fourth year teaching 9th grade English at BHS and she is also looking forward to her role as Pom sponsor. In her spare time, she enjoys spending time with family, going to church, and working out.