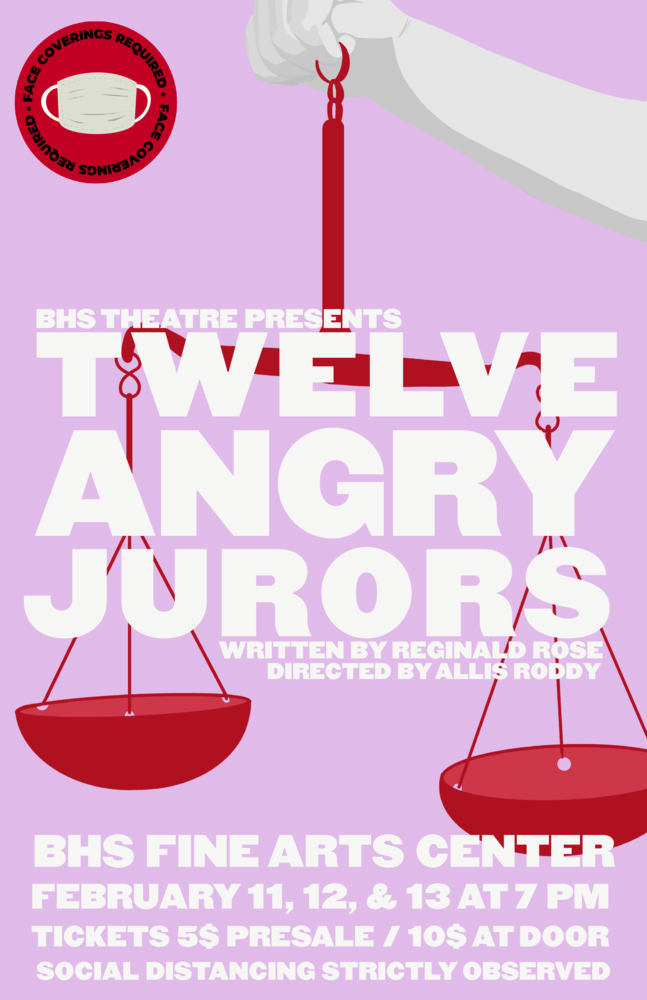 A blistering character study and examination of the American melting pot and the judicial system that keeps it in check, Twelve Angry Jurors holds at its core a deeply patriotic faith in the U.S. legal system. The play centers on Juror Eight, who is at first the sole holdout in an 11-1 guilty vote. Eight sets his sights not on proving the other jurors wrong but rather on getting them to look at the situation in a clear-eyed way not affected by their personal prejudices or biases. Regional Rose deliberately and carefully peels away the layers of artifice from the people and allows a fuller picture of them- and of America, at its best and worst- to form.

Originally written for an all white, male cast and titled Twelve Angry Men, the play has been adapted over the years to be more inclusive, allowing us to showcase the diversity of the students in this production. This is a difficult time for live theater, but BHS Theatre has adapted by double casting this production, which gives the students an opportunity to grow as actors and allows our community an opportunity to see the amount of talent at BHS. Come see the show multiple times to see how interpretations shift with a different cast.

Masks will be required to enter the auditorium and socially-distanced seating will be available. Tickets will be $5 presale, available from February 1st-10th, and $10 at the door. Doors will open at 6:30. Presale tickets can be purchased from any acting student or Mrs. Roddy. Character deliveries will be available to BHS faculty, staff, and students upon request. If you would like to schedule a time for a delivery or reserve tickets for will call please email Mrs. Roddy at roddyaj@bps-ok.org.