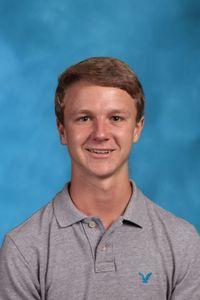 Bartlesville High School senior Max Williams has been named an Academic All-Stater by the Oklahoma Foundation for Excellence. He is among 100 top public high school seniors across Oklahoma to be selected out of 379 qualified nominations.

Williams is the son of John and Stevie Williams. He is the Cross Country Team Captain where he is a three-time state meet qualifier and was an alternate for the state championship team his freshman year. He is a distance runner in Track and Field, where he runs in the 4x800m, 1600m, and 3200m events, and his team earned an academic state championship in his sophomore year. Williams received the Outstanding New Marcher Award and the Drum Major Leadership Award in marching band. He played the snare drum in the marching band in grades 9 through 11, percussionist in the concert band, percussion ensemble, and steel band. Williams is a two-time All-State Band member and five-time All-District Band member.

Williams is a Life Scout in Troop 5 of Boy Scouts of America, a National Honor Society Member, and a Chemistry Olympiad Member.

In his spare time he enjoys running, playing percussion and guitar, listening to music, and watching or reading running content and media.