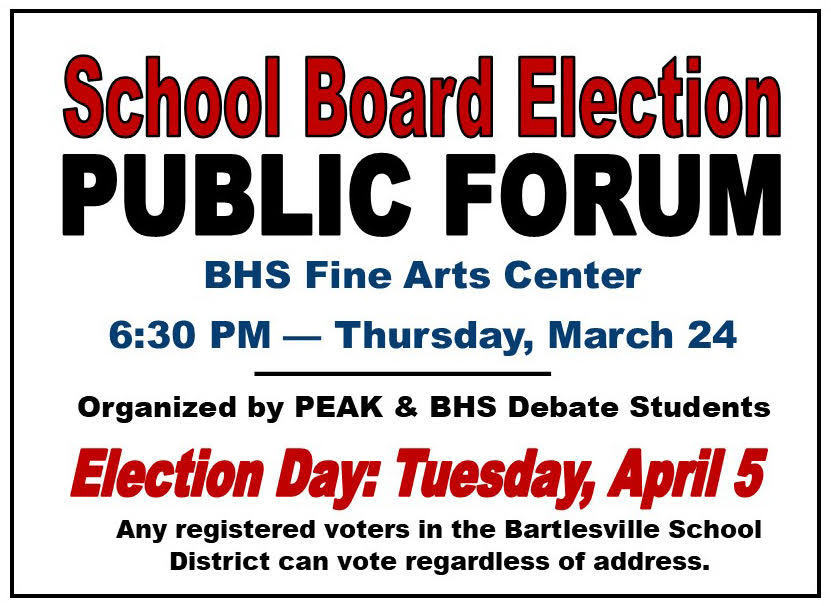 The two candidates for a contested seat on the Bartlesville Public Schools Board of Education will have an opportunity to discuss their differences this Thursday, March 24, at a public forum beginning at 6:30 p.m. at the Fine Arts Center auditorium at Bartlesville High School (BHS); the entrance is off 18th Street between Hillcrest Drive and Shawnee Avenue.

Incumbent school board member Scott Bilger and challenger Jonathan Bolding will participate in an hour-long Q&A discussion organized by BHS debate students with the support of the local nonprofit Public Education Advocates for Kids (PEAK).

The school board election is Tuesday, April 5. Any resident within the Bartlesville Public School District can vote in this election.

Guidelines for the forum were modeled after the rules followed by debate students in formal competition with help from Trey Cabler, advisor to the BHS debate team. The event will also be live streamed via the PEAK Facebook page.

Bilger is a Phillips 66 attorney who has been a board member since 2010, serving as president for the last six years. Bolding is a local realtor.

After the forum, audience members will be able to meet with each candidate informally in separate Q&A sessions in the auditorium. The event organizers emphasized that signs, literature or other items showing support of either candidate or that express positions will not be permitted on school property.

Questions for the candidates will be asked by Keri Bostwick, a mutually agreed-upon moderator. Bostwick has been a longtime local school teacher and is currently a higher education administrator and member of PEAK.

As moderator, Bostwick will seek each candidate’s views on a variety of board-related topics including why the candidate is running, his qualifications, his vision for the district and what he considers to be the district’s strengths and areas for improvement.

The forum is one of a series of public discussions and panels that PEAK has organized since 2017 to help parents and other community members to better understand the issues facing public schools and how they can be addressed.