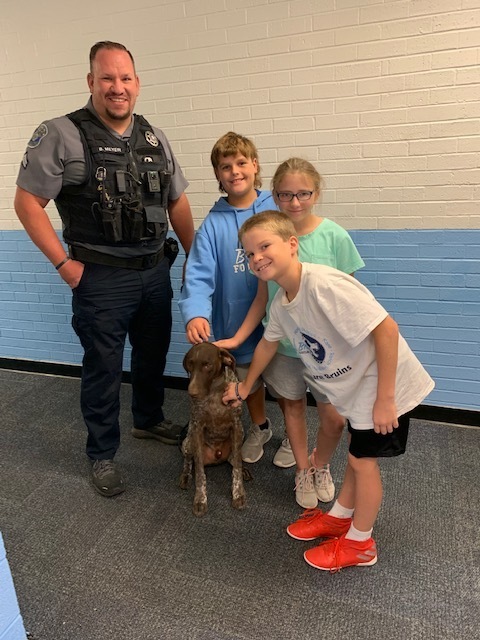 [This is the second in a six part series to highlight Bartlesville Public Schools’ School Resource Officers and raise community awareness regarding safety in our schools.

Corporal Brandon Meyer is one of four school resource officers (“SROs”) assigned to the Bartlesville Public Schools District (the “District”).  As a reminder, the District is in the process of adding five SROs over the next ten months to the four SROs already in place.  The Bartlesville Public Schools Foundation sat down with Corporal Meyer to learn more about his role within our schools.

Born in Kansas City, Missouri, Corporal Meyer grew up in Bartlesville, living here with his parents and two brothers since he was four.  Corporal Meyer is a Bartlesville High School alum, graduating with the Class of 2005.  He worked for Keleher Outdoor Advertising for several years hanging billboards right out of school, before moving into the criminal justice world.

Corporal Meyer’s father, Jim Meyer, was a police officer for Bartlesville for many years, so it was no surprise to his family, when Meyer began working as a jailer in the Washington County jail, and was hired to be a patrol officer by the Dewey Police Department in January of 2009.  A few short years later, the Bartlesville Police Department hired Corporal Meyer to serve as a patrolman on their force.

For over a decade Corporal Meyer worked a variety of shifts with the Bartlesville PD, serving on the day, evening, and night shifts.  In 2018 he was named Bartlesville “Officer of the Year” and that same year, received a Lifesaving Award after saving the lives of residents in a burning home.   In addition to serving as a patrolman, Corporal Meyer has served as a part of the Bartlesville swat team for the past ten years.

In August 2020, Corporal Meyer approached Captain Troy Newell with the idea to work with a therapy dog.  His Captain matched him with a German Shorthaired Pointer named Jax and assigned him and his new “partner” to be SROs for the District.  Meyer and Jax initially covered Central and the elementary schools on the west side of Bartlesville (Wayside, Jane Phillips and Richard Kane).  Officer Korie Plummer was assigned to Bartlesville High School at the time; and Officer Chris Bullen was assigned to Madison and the east side elementary schools (Ranch Heights, Hoover, and Wilson).

During the interview, we walked the halls of Kane Elementary with Corporal Meyer and Jax.  Every teacher and student we passed in the hallways stopped to greet both Corporal Meyer and Jax with a “Good Morning” and a smile – Jax would also get a pat on the head or a brief hug around the neck.  Corporal Meyer relies heavily on Jax, who he is quick to clarify is a therapy dog, not a drug dog.   Jax is certified by the Alliance of Emergency Response Instructors and Examiners as a competent member of the Critical Incident Response Team.  He is technically a police officer, owned by the Bartlesville Police Department, but he goes everywhere with Corporal Meyer – going home with Meyer’s family in the evenings and on weekends, riding in Corporal Meyer’s police vehicle and hanging out with Meyer at the schools throughout the day.  He is trained to provide a calming presence in tense situations.  Corporal Meyer used Jax to help diffuse situations – if a student is agitated or stressed, spending some time talking to Corporal Meyer and petting Jax can usually calm them down and get the student to a place where he or she can move forward in a positive direction.

Officer Meyer gave us some insight into a typical day for him. He and Jax start their day at Kane Elementary, where Meyer’s office is located.  He greets students entering the building with high fives and handshakes.  He attends the morning assemblies and goes outside on the playground with Jax at recess to play football with the kids.   He is stationed at Kane, but transitions to various elementary schools throughout the day when called.  If there is a concerning situation at an elementary school, the school principal or Kerry Ickleberry, Director of Health and Safety, can simply call him on their two-way radios and he responds immediately.  An example of some typical situations he may respond to throughout the day include: a disagreement between students, a suspicious vehicle parked near a school, and going on a home visit to check on a student with a school administrator).

When he is not responding to a specific situation, he is able to focus on his favorite part of his job – character development.  Corporal Meyer takes every opportunity possible to serve as a mentor and help students develop their character.  For example, if a student is repeatedly getting in trouble for failing to listen to a teacher, Corporal Meyer may pull that student aside and work with him or her on the importance of respect, walking them through the steps of verbal apologies, written apologies, and even asking them to read their apologies to the offended parties.  He has visited with students about responsibility and pride, sharing with them the famous “Reasons to Make Your Bed” speech from Navy Seal Admiral McRaven.  Corporal Meyer also initiated the Department Coin Challenge.  Pre-pandemic, he would attend morning assemblies at the elementary schools and challenge students to correctly answer trivia questions.  If they answered correctly, they received a special coin that Meyer had purchased. The winning students would have to keep track of their coins all year; and at the end of the year, he would host a pizza party for those students.  He views this program as a way to reward ambition and accountability.

Each day, he focuses on building relationships and rapport with his students so that if and when there is a situation requiring a response, he can quickly relate to the students and diffuse the situation. He holds himself out as someone students can talk to when they need a compassionate ear.    He works hard to be seen as a mentor, channeling a coach mentality.  He already sees the impact of building these relationships with students when they are young.  He recently saw several of his students from elementary school at Central Middle School – students who had gotten into trouble often at the elementary level.  When they saw Meyer, they came running up to him and gave him high fives.  They respect him and view him as a friend, not someone to be feared and avoided.

When Corporal Meyer is not working in the schools, he enjoys hanging out with his family, coaching youth Bruins football, and cheering on the Kansas City Chiefs.  He has a son and several nieces at Wayside Elementary.   Similar to comments Officer Plummer made to us in her interview last month, Corporal Meyer has ideas for how to deepen his connections with the students.  He has ideas for further mentoring opportunities and character development.  He hopes to have more time to implement these ideas as the District hires additional SROs.

The Bartlesville Public Schools Foundation is raising funds to support and sustain the District’s valuable SRO positions.  To contribute to this fundraising effort, contact Blair Ellis, BPSF Executive Director at 918-336-8600, ext 3523 or ellisb@bps-ok.org, or by visiting bpsfoundation.org/donate